2020 won't be forgotten in a hurry as the AFL somehow managed to complete a season. Here are some of the moments, events and achievements that made it special.

Queensland became the centre of the AFL universe in 2020 - and the benefits from the code's move to the Sunshine State are likely to be considerable and enduring.

With the support of the Queensland government, the 10 Victorian clubs relocated to hubs in early July after it became obvious that games in that state would be impossible due to the second wave of COVID-19.

Fans locked down in Victoria could only watch on in envy in their lounge-rooms as Queenslanders enjoyed a feast of footy.

In the original 2020 fixture, the Gabba had been scheduled to host 11 games and Metricon Stadium 10. But Queensland has hosted more than half of the premiership season games and was justly rewarded with the first AFL grand final to be held outside of Victoria.

Metricon Stadium hosted 44 games this season, while Saturday night's grand final will be the 35th match, including five finals, at the Gabba.

There were also four games at Cazaly's Stadium in Cairns.

The two Queensland teams, Brisbane and Gold Coast, had the advantage of playing most of their games in their home state and there are sure to be other future benefits for the Lions and the Suns.

Living in Queensland's warmer climate might be more attractive to players from the southern states, making it easier for those clubs to attract better players.

Hosting so many games, including the season's showpiece event, will boost the code's exposure in Queensland. The AFL hopes to make further inroads at grassroots level at the expense of other sports, particularly rugby league. Port Adelaide's 150th year came close to a fairytale finish, only to end in bitter disappointment in a memorable preliminary final against Richmond.

As crestfallen coach Ken Hinkley put it so aptly post-match last Friday night: "There's no doubt we climbed a mountain (but) we didn't quite get to the top."

After finishing 10th in the past two years, the Power were on top of the ladder for the entire premiership season, becoming the first team since Essendon in 2000 to achieve the feat.

Travis Boak's career-best form in the midfield earned him a third All-Australian blazer.

Youngsters Zak Butters, Xavier Duursma and Connor Rozee were excellent contributors in their second seasons at the elite level.

Port Adelaide wasn't the only club to take big strides this year.

Brisbane gave its fans an enjoyable ride after the finals disappointment of last season.

The Lions won 10 of 11 games at the Gabba, finished second at the end of the home and away season with a 14-3 record and won a qualifying final against Richmond before bowing out to Geelong in last Saturday night's second preliminary final.

In the Saints' first appearance in a finals series since 2011, they pulled off a gritty win over the Western Bulldogs before being eliminated by Richmond in the second semi-final.

They are building nicely under Brett Ratten, who made a welcome return to full-time senior coaching.

Rowell a gun of a Sun 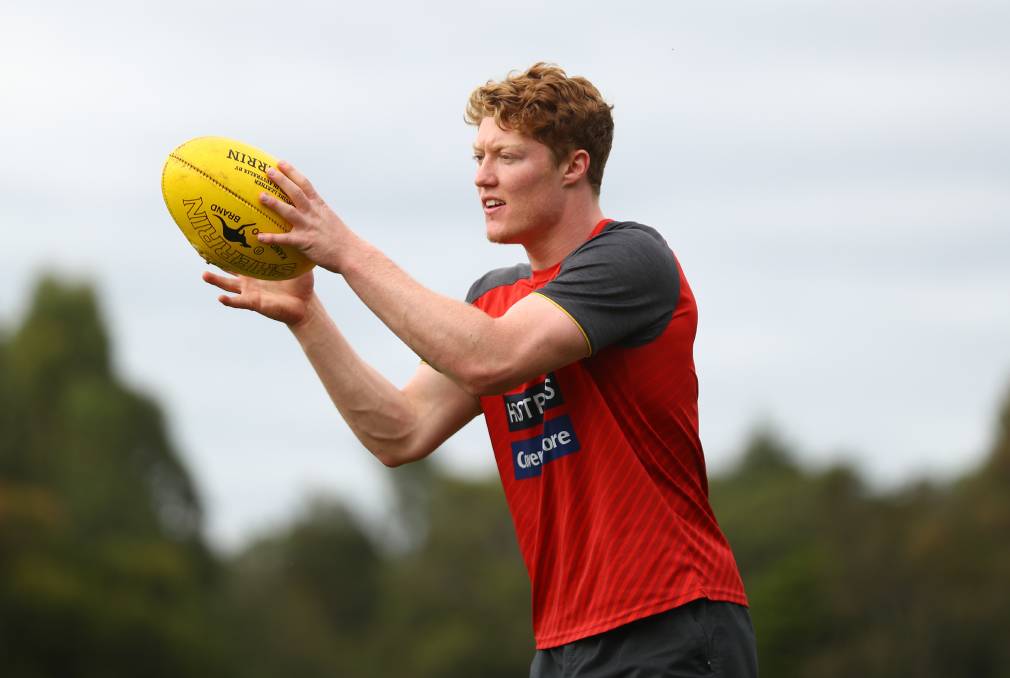 As the top pick in last year's national draft, there were high expectations on Matt Rowell and it was clear from early on that the Gold Coast had got it right with the classy midfielder.

His first four AFL games were arguably the best produced by any draftee in their debut season. Rowell earned a Rising Star nomination in his second game against West Coast, picking up the maximum 10 votes in the AFL Coaches Association's award and three Brownlow votes.

He polled maximum AFLCA votes and six more Brownlow votes in the next two games against Adelaide and Fremantle before suffering a season-ending dislocated right shoulder against Geelong in round five.

Rowell didn't waste his time on the sidelines, offering his considerable footy IQ as an assistant on the bench to help senior coach Stuart Dew.

The injury ended the young Victorian's hopes of being this year's Rising Star which was taken out by Docker Caleb Serong, who slotted beautifully into the midfield alongside dual Brownlow medallist Nat Fyfe and veteran David Mundy to be a popular and deserving winner.

Rowell, one of four Suns to earn Rising Star nominations alongside great mate Noah Anderson, Connor Budarick and the exciting Izak Rankine, remains eligible to take out the award next season - and who would bet against him if he is injury-free.

Jack Newnes has kicked 68 goals in his 172-game career, but none has been more memorable than the magnificent drop punt that sunk Fremantle in round 12 at Optus Stadium.

The lead-up to Newnes' 45-metre kick after the final siren was shrouded in controversy, but that should not detract from his superb conversion with a wet ball, from the boundary line and on the wrong side for a right-footer. 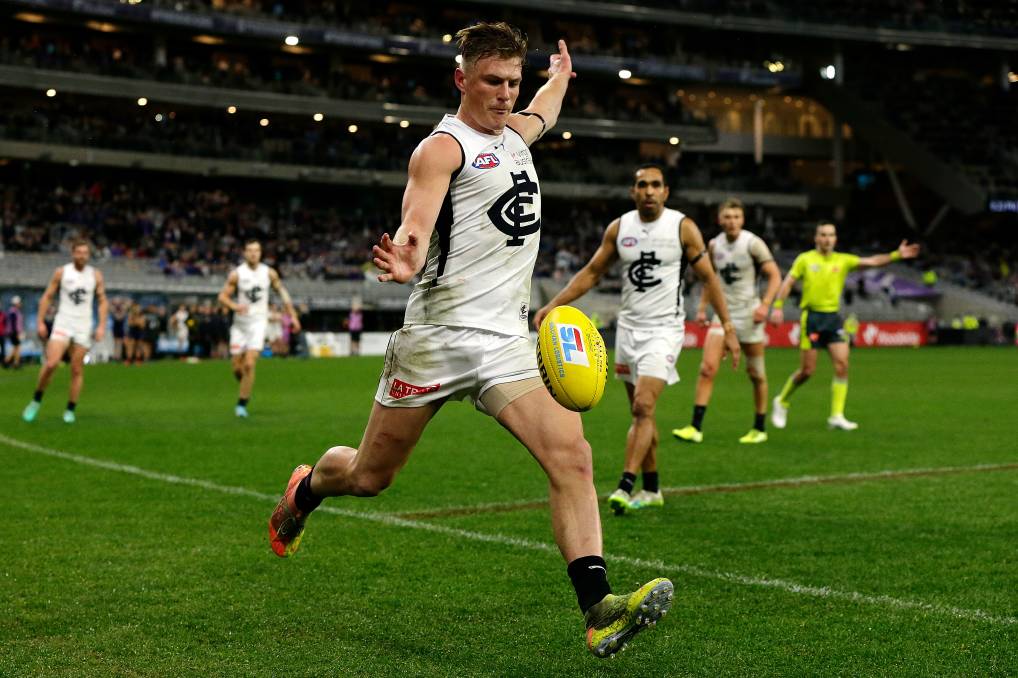 Carlton's Jack Newnes' goal after the siren was one of the 2020 season's most memorable moments. Photo: Will Russell/AFL Photos via Getty Images

With Dockers supporters roaring their disapproval after a contentious downfield free kick to Newnes, he showed great composure in removing a cameraman and security staff out of his way before taking his kick.

After the ball sailed straight through at goalpost height, he was mobbed by his excited Carlton teammates, who were delighted to be on the winning side of a game decided by a kick after the siren.

Five rounds earlier, the Blues were left demoralised and heartbroken after Port Adelaide star Robbie Gray steered through a 45-metre drop punt from the boundary line to secure a memorable Power victory at the Gabba.

Newnes, the former Saint who played every game, was most unlucky not to have won the Goal of the Year award, which was taken out by Collingwood's Josh Daicos.

Daicos channelled his father Peter's remarkable skills with a checkside goal on the run to seal the Magpies' win over Sydney in round 10. 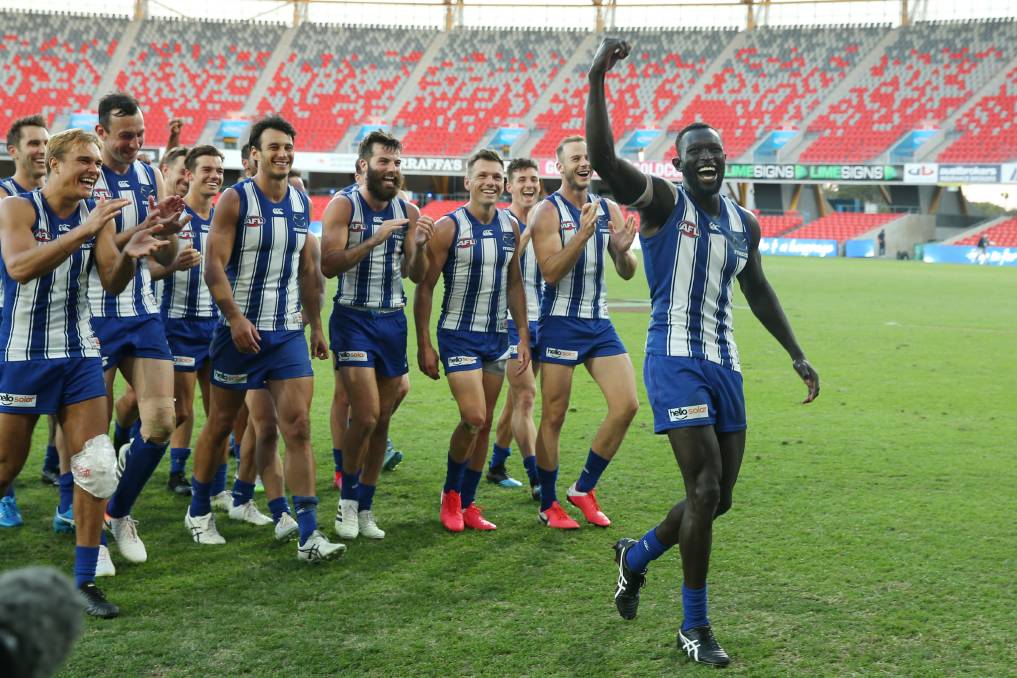 Despite the resilience and determination he has shown in the past two years after suffering serious hip and pelvic injuries in a fall from Melbourne's Bolte Bridge, Majak Daw admitted he had doubts that he would return to the AFL.

But the North Melbourne big man finally made it back in August against Adelaide at Metricon Stadium and he put the exclamation mark on a much-needed Kangaroos victory with a last-quarter goal, much to the delight of his excited teammates.

Daw, 29, would play only another three games for the Roos before being delisted at the end of the season, but he hopes to continue his AFL career with another club.

Joe Daniher made the season's other notable comeback after 467 days on the sidelines and he had an immediate impact, inspiring Essendon's second-half revival to overcome Hawthorn in round 14 at Adelaide Oval.

The key forward, 26, kicked three goals against the Hawks, but failed to add to that tally in his final three games for the Bombers.

Daniher, who wanted to leave Tullamarine at the end of last year, has announced his intention to join Brisbane next season as a restricted free agent. 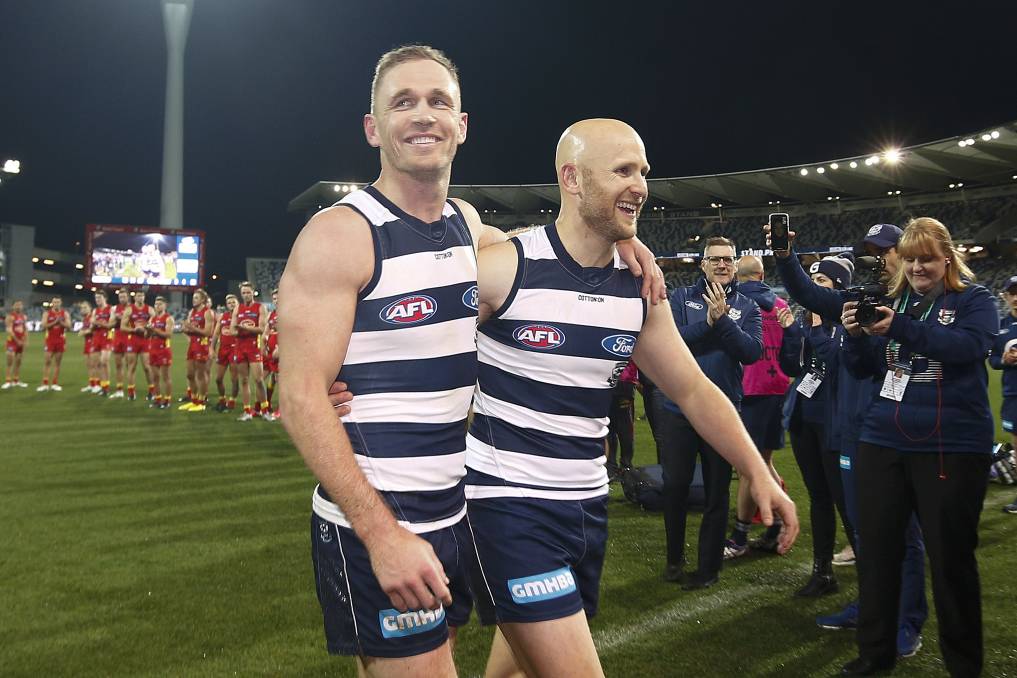 GMHBA Stadium should have been packed for such an occasion but with no spectators permitted milestone men Gary Ablett and Joel Selwood had to be satisfied with merely a thumping win and a guard of honour in round five.

For Ablett, it was appropriate he celebrated his 350th game against Gold Coast, having been the first Suns captain and played 110 games in seven seasons for them.

Selwood also loved sharing the spotlight in his 300th game with his great mate Ablett.

The Cats skipper was busy in the midfield with 22 disposals and eight tackles, while Ablett had 14 disposals and finished the game in style with a set-shot goal from outside 50 metres.

The Geelong greats have one more big assignment ahead of them on Saturday night.

Selwood, 32, is aiming for his fourth premiership medal, while Ablett, 36, hopes to make it three flags in his 357th and final AFL game.

Top 10 games of the season