Skip to navigationSkip to contentSkip to footer

We won't be going overseas for some time (except perhaps to New Zealand and the South Pacific). But Australia's a huge, diverse country and there are experiences, places and destinations that can make you feel just like you're somewhere abroad.

The Hamptons by the Queensland border House in the far northern NSW surf town of Cabarita was an old '60s surf motel before two sisters turned it into Australia's version of a chic Hamptons getaway. Drink cocktails by the pool or at the open-plan bar, where you can see whales pass between June and October.

It's all Long Island nautical in here: the pool is framed in teak and fringed with palms, and there are blue-and-white candy-striped day beds to help fill your days. In 2019 Halcyon House made the prestigious Conde Nast Best Hotels In The World Gold List.

Italy in the cane fields You won't find an odder slice of Italy anywhere than at Innisfail in Far North Queensland. Italians shaped the town and surrounds when they migrated here in 1891 to work in sugar cane plantations.

Now over half of Innisfail locals are of Italian heritage, and the town centre shows it. It's like being in Europe, home to Australia's best-preserved Art Deco streetscapes. You won't eat better Italian food anywhere in regional Australia. From delis (Oliveri's Continental Deli) to pizza (Roscoes Pizza) to fine dining (Sapore Di Italia), it's bellissimo.

An English escape outside Sydney Drive 90 minutes from Sydney's CBD right into the English countryside. With its cooler temperatures, green rolling hills and a landscape full of historic stately manors, the Southern Highlands would make any homesick Englishman happy.

Nineteenth-century British immigrants modelled the region's heritage towns, such as Bowral and Mittagong, on quaint English villages. Restaurants and B&Bs come with log fires for chilly winter nights and streets are bordered by English-style gardens (tulips are celebrated in an annual festival). 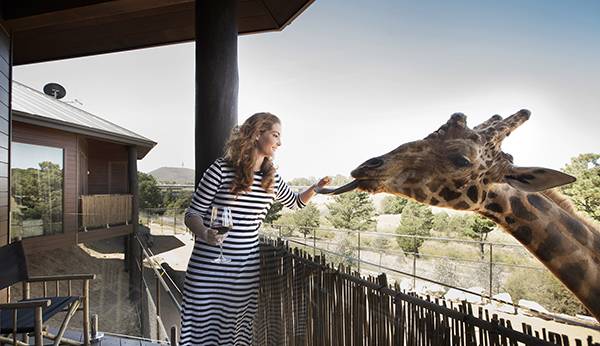 You don't need to be in southern Africa to sleep among giraffes: you can have close encounters with exotic wildlife... in Canberra. In 1998 a local family built a zoo, and now they've created Jamala Wildlife Lodge amongst it, so guests can sleep in five-star bungalows with their favourite animals.

It's hard to choose between the treehouses, where you can feed giraffes from your balcony, or lemur rooms in the main lodge.

Guests congregate nightly for African-style dinner parties - a percentage of the profits go back to the zoo's breeding programs.

Sail into the blue sea Sure, there are over 6000 Greek Islands, but Queensland has nearly 2000 of its own. And there's nowhere better for a Greek Island-style yachting holiday than Far North Queensland's Whitsunday Islands.

Known as one of the best boating destinations on Earth, there are 74 islands here, protected by the Great Barrier Reef - and all but eight are completely uninhabited. Charter your own day-sailing cruise with a personal skipper for up to six people (try Airlie Beach Day Sailing) or skipper your own yacht for multi-day trips (try Cumberland Charter Yachts, Whitsunday Rent A Yacht or Sunsail). Is it the smell of the pines, or the baby blue of the sky? Or perhaps it's the scale of the mountains that surround you on all sides - but being in Bright feels just like spending time in Canada's British Columbia.

In summer, visitors take to the Ovens River on kayaks, or to their bikes on the Murray to Mountains Rail Trail cycleway which connects villages in the area. Autumn is famed for its fall foliage and festivals. In winter, there's snow at the tops of Mount Buffalo National Park above, and one of Australia's largest ski resorts, Mount Hotham, is only just around the corner.

The Amazon of the Top End

It looks just like the Amazon, except the crocodiles here are twice as big as your largest black caiman, and 100 times more deadly. Taking an airboat up your own deserted coastal floodplain in the Northern Territory feels as adventurous as any safari within the Amazon.

Stay in one of 10 safari-style bungalows overlooking the floodplains, three hours' drive east of Darwin at Bamurru Plains. You'll have 300 square kilometres of the Top End entirely to yourself. Sure, we can't make it to England to view Oxford's stunning architecture: those grand buildings built out of golden stone that define the city. But we have... Ross.

Located about halfway between Launceston and Hobart, you mightn't have heard of it, but Ross is the finest 19th-century village in Australia. Yet few tourists ever go. It even has a rival to Oxford's famed Bridge of Sighs. The Ross Bridge was built by convicts in 1836 (it's the third oldest in Australia), and was of such high quality, its creators received a pardon (even though one had a life sentence).

There are 40 historic buildings in Ross, and 22 are on one street.

Asia of the Kimberley 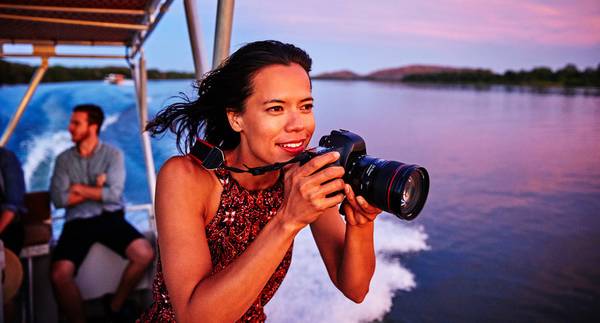 With its red soil, crocs and famed blue water, some might consider Broome the quintessential Aussie coastal village. But look closer - there's a lot of Southeast Asia in this town. Check out its red-painted wooden archways, the Chinese street names and street signs with Japanese and Chinese calligraphy, the bronze life-size statues of Asian historical figures and the cemetery with sections devoted to Japanese and Chinese former residents. Even iconic Cable Beach got its name from the undersea telegraph cable built here in 1889 to connect it to Java.

A century ago, indentured labourers from Japan, China, Malaysia and the Philippines outnumbered Europeans three-to-one, most working in the perilously dangerous pearling industry. Their influences - and their ancestors - are all across town. While Thredbo gets the kudos for its European-style village, Mt Buller - three hours' drive outside of Melbourne - slips under the radar. Yet, it's as Austrian as the Tyrol itself. Its first chalet was built by an Austrian, so start your day in the restaurant that celebrates his legacy, Koflers Hutte.

Have lunch at the top of The Fox Chairlift at Tirol Cafe, a little piece of the Tyrol on the mountain, and warm up with a gluhwein on the deck overlooking Stirling Mountain. Finish your day with schnapps and schnitzel at the most famous Austrian restaurant outside Austria, Pension Grimus, named for its founder, Hans Grimus, one of a team of Austrian pioneers who helped establish the resort in the 1960s. There are gold rush towns across western USA - some survived; others, like Ashcroft in Colorado, died altogether. Silver was found in 1880 and within two weeks streets were built. Five years later, there were 20 saloons for a population of 3500. By the end of 1885, there were less than 100 locals. You can still see remnants of the town on a drive from neighbouring Aspen.

Australia has a few of its own Ashcrofts: but one of the best substitutes is Menzies, 700 kilometres east of Perth. Gold was discovered in 1894 and, within two years, 13 hotels and two breweries were built and the town had 10,000 residents. Now there are less than 100 locals, but you can feel its mining history driving down the town's lonely main street. Drive half an hour out of Adelaide into the southern edges of the Adelaide Hills and you'll find Australia's oldest surviving German settlement, Hahndorf, and plenty of beer. Settled by Lutheran immigrants in 1838, parts of the town's original fachwerk architecture still stands - shaded by century-old elm trees on its main street.

Blue-and-white flags in traditional Bavarian style fly from Hahndorf's pubs, and you can always order a Lowenbrau beer with a bratwurst and sauerkraut. You'll also find the oldest Lutheran church in Australia (built in 1839) and you can visit farms owned by fifth and sixth generations of the same Lutheran family.